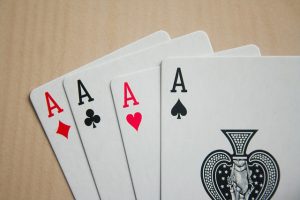 Flush draws are the strongest draws in Texas Hold’em. They are easy to play and pay of well when they it. When you flop a flush draw there will be two or three cards of the same suit on the board. The number of suited cards on the flop influence the way you play the hand in some ways.

There are 13 cards of each suit in the deck. A flush draw is when you have four cards of the same suit; consequently there are nine unseen cards that will improve your hand. This gives you a 35% chance of making a flush on either the turn or the river. Your hand is even stronger if it has some additional value, for example a straight draw, a pair, or overcards. A flush draw might have as many as 21 outs that will give the best hand. For example, if you’re holding Qd-Jd and the flop comes 10d-9d-2c. Nine cards will give you a flush, six cards will give you a straight (K:s and 8:s), and six cards that will give you the highest pair (Q:s and J:s).

A flush draw on a two-suited flop should almost always be played, but there are a few exceptions:

Your position and the number of players in the hand

If theirs is three or more players that see the flop you want to keep as many as possible in the hand to maximize your winning if the flush hits. This means that you should check or call from early positions if you didn’t raise before the flop. If you did raise before the flop you might win the pot right away through a bet. For example, if you raised with A-K and the flop shows three low cards, your opponents are likely to fold if you make a bet.

If a player in early position bets and there’s a raise before it’s your turn to act it’s correct to make another raise. The reason for this is that you want the pot to be as big as possible if your flush hits. A raise might also give you a free card on the turn. If you’re up against one or two players you might attempt a semi-bluff to win the pot right away. If you have overcards you can raise to make players with small pairs (that might improve to two-pair), fold.

If the flop is three-suited your flush draw is obviously weaker. In these cases you should only play if you’re holding a suited Ace or King. Normally there won’t be much action on a three-suited flop, since everybody at the table realizes the possibility of a flush. The only players who will call in these situations are those that already have hit a best poker hands like a two-pair or a set. If a fourth flush card hits it’s likely that there will be even less action.