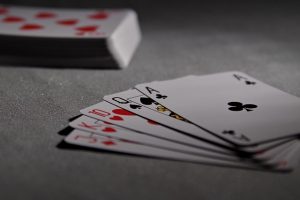 Straight draws are more difficult to play than flush draws but they are still strong draws in Limit Texas Hold’em. A straight draw will either be open-ended, using one or two of your hole cards, or gut-shot. With an open-ended draw you have 8 outs that will give you a straight.

It’s preferable to get a straight draw on a rainbow flop. If it’s two-suited the risk of another player handling a flush draw is obvious and that would mean that you only have 6 outs instead of 8. If there is a lot of action on a two-suited flop you might as well throw your straight draw away. When it’s a rainbow flop it’s will generally be correct to call, but there are a few exceptions:

These hands are not as strong as when both your hole cards are in play. The reason for this is that the straight draw is so obvious, and besides, someone else might be holding a straight already. The risk of a split pot is big in these cases and if a fourth straight card hits there probably won’t be very much action.

Gut-shot draws only gives you 4 outs which means you have a 1 in 12 chance to make a straight. The ideal is to have a high pair combined with the gut-shot straight draw. For example, if you’re holding Q-J and the flop is Q-10-8. If a 9 comes on the turn or the river you will have a Queen high straight. The problem with these hands is that someone else might have a higher straight. If someone is holding K-J and a 9 comes you will lose the pot.

Generally you need to be drawing to the highest straight and have some additional value like overcards to play gut-shot draws.