In poker it’s important to be unpredictable. You achieve this by adding misleading plays to your game. If you’re always playing the same way, your opponents will surely notice this and beat you easily. 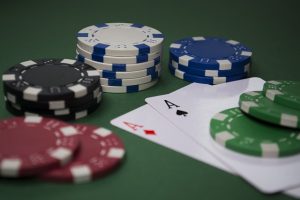 Getting a free card

If you’re in late or last position you can bet or raise with a drawing hand on the flop. Hopefully this will make your opponents check in the next round giving you the opportunity to check as well and thus get a free card if your draw didn’t hit. This is a move that will save you some money, even if someone raises or re-raises on the flop. In these cases you will at least know that you’re up against a strong hand and will be able to adjust your play accordingly. If the other players check again on the turn you might attempt a bluff, but don’t use this move to often. It’s not that easy to get your opponents to fold. If another player anticipates that you’re hoping to draw a free card and bets you have to evaluate if your hand is strong enough or if you’re opponent might be bluffing.

If you’re holding a strong hand you might check in order to raise if someone else bets. For example, if you’re holding A-K and the flop is A-K-x. You check, a player behind you bets and when it’s your turn to act again you raise. The most effective check-raise is when a player directly to the left of you bets and several others call. In these cases your raise will force them to pay to bets to stay in the hand. Check-raising works well in No Limit Hold’em when you’re up against weak players that rarely will fold a hand. You will be in trouble if a player raises in the upcoming betting round. This player has probably hit a draw.

A semi-bluff is when you bet or raise with a drawing hand that might not be the best at the moment but probably will be if you hit your draw. You make a move like this in the hopes that you will take home the pot right away, but even if another player calls or raises you still have a chance to win. Semi-bluffs are usually made late in the hand, for example on the turn when there’s only one more card to come.

If you have a strong hand, for example a full house, it might be correct to slowplay. Slowplaying is when you check or call in one round in order to bet or raise big in an upcoming round. This is a way to conceal the strength of your hand in order to maximize the payoff (your opponents might fold if you bet or raise too soon). However, slowplaying might be risky and you should only be done when your hand is really strong. Otherwise another player might draw a card that beats your hand. When there are strong draws on the board, slowplaying should be avoided. Also refrain from this move when there are many players in the pot or when the pot is already big.

This move somewhat differs from the ones mentioned above. You do these plays to mess with your opponents’ minds in the hopes that you will profit from this later in the game. An advertising play is when you play wildly with a hand you normally wouldn’t play and make sure the whole table sees what you’re doing. Later, when you get a strong hand and play it aggressively, the other players might think you’re making another wild play. This tactic is obviously most effective if you know that you will be playing against the same opponents for a long time.

The hands that are best suited for advertising plays are those that actually might win you the pot, for example A-xs, 7-6 and 6-5. When you’re making an advertising play you should play aggressively from start to finish. If you’re caught bluffing make sure everybody at the table knows it. If all your opponents folds to your bluff, it’s even better. In these cases you might make a new advertising play already in the next hand. When an advertising play has been revealed you should start playing tight. Your crazy move will stick in your opponents’ minds and they will call bets with hands they normally would throw away. It’s very important that you take advantage of this.