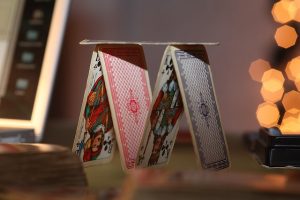 Bluffing is a very important poker skill. Players that never bluff become predictable and will not be able to maximize their winnings. But what is a bluff? It’s when you bet or raise even though your hand isn’t likely to be the best or when you are trying to steal the pot before all the cards are dealt. In a cash game, you will be able to calculate whether a bluff will be profitable or not. You simply compare the odds of the bluff being successful to the size of the bet and the size of the pot. Consequently, the ability to determine the likelihood that your opponent(s) will fold is a vital skill.

It’s crucial that you consider these factors when deciding whether to bluff or not:

Type of opponent (style and class)

Weak players will call with almost any hand. Obviously, it’s useless to attempt a bluff against such an opponent. The ability to fold a hand is a sign of class – make sure the player you’re trying to bluff is good enough to do so. When it comes to playing styles, tight players are easier to bluff than loose players.

Number of opponents in the pot

If there are three or more players in hand, you should avoid bluffing, especially in Limit Poker. When you’re facing only one opponent, the pot will usually be smaller and thus less desirable. Under these circumstances, the bluff is more likely to succeed.

Your own table image

It’s difficult to make successful bluffs with a loose table image. If you’ve been caught bluffing recently, the other players will be more likely to call when you try again. However, reverse psychology can sometimes prove beneficial in these situations. For example, if a strong player caught you bluffing and he thinks of you as a good player, he might think you would not dare to try another bluff. If you have a tight table image, bluffing will be easier.

Your ability to read the other players

The hardest and most important bluffing skill to master is the ability to read your opponents. If you generally make correct assessments about the strength of their hands, you will know when it’s a good time to make a bluff.

The look of the board

When the board looks like it might have hit your opponents or presents many drawing possibilities, you have to very careful. It’s generally not a good idea to attempt a bluff in these situations. Instead, you should look for boards without many draws or cards that are likely to improve the other players’ hands. If you can represent a strong hand, the bluff is more likely to succeed. What you want is an uncoordinated board with one scare card that you can represent.

The other players will be less likely to fold if the pot is big because they get better pot odds. However, if you make a successful bluff in a big pot, the reward will obviously be bigger. This is when good judgment comes into play and helps you make correct decisions.

Your position at the table

When you’re in a late position, you will normally have more knowledge about the strength of the other players’ hands. Use this information to decide whether to bluff or not. For example, if it’s checked to you, the board looks favorable, and there are few players in the pot, a bluff is likely to succeed.