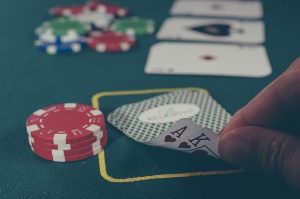 Texas Hold ’em is by far the most popular poker game in casinos around the world. It is a variation of 7 card stud poker, where 5 of the cards are dealt in the middle of the table, and can be used by anyone in the hand. Each player is dealt 2 cards, face down, which are known as the players ‘hole cards’. Players use their two hole cards as well as the community cards to make the best possible 5 card combination.

Texas Hold ’em owes it’s popularity to exposure it gained on TV and the internet in the early 2000’s. Today, the no limit betting structure is the most widely used in television events of the World Series of Poker and the World Poker Tour.

Mathematical probability is introduced into Texas Hold ’em because each player is only dealt two cards, giving players the ability to employ strategic analysis. There are many different books that have been published regarding the various strategies of Texas Hold ’em, and recommendations for improving game play by reducing risk, and maximizing pots when odds are good. In general, most strategies suggest playing few hands, but aggressively betting and raising the hands that are played.

In Texas Hold ’em, the objective it to accumulate the most chips or money. Players in each hand are afforded the opportunity to bet during each round of betting. Players bet that they have the best hand. Once a bet is made, the next player can ‘call’, or match the bet, raise the bet to a higher amount, or fold, conceding their hand.

To start playing Texas Hold ’em, a dealer is first designated, usually by dealing cards around the table until one play is dealt an Ace. This player is designated the dealer. When you are playing in a casino, the dealer is not actually the one the deals that cards, but the player is still designated as the dealer. The dealer is in the best position at the table, because he can see what everyone else at the table is going to be before they commit money themselves. The player to the left of the dealer is the small blind, the player to the left of the small blind is the big blind. Blinds are best described as antes. The small blind is generally half as much as the big blind.