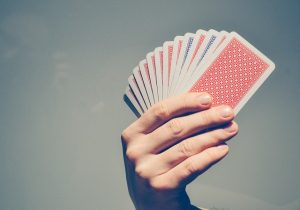 In poker, whoever shows down the best hand wins. The best five card hand you can have is a royal flush, ten jack queen king ace of the same suit. This is followed by a handling straight draws flush, any five consecutive cards of the same suit, four of a kind, four cards of the same rank, and a full house, which is three of a kind plus a pair. Anyone with a basic understanding of poker is aware of these poker hand rankings. But what are the best starting hands in poker? The answer varies depending on the game you are playing.

In Texas Hold’em, the best starting hand is pocket aces. If you are holding pocket aces, anyone who stays in the hand will have to improve to beat you. The drawback to pocket aces is that your hand is unlikely to get any better. The only way you can really improve is if an ace comes on the flop, in which case no one will play with you, or if four of one of your suits or four cards to the nut straight appear on the board, in which case no one will play with you. On the other hand, there are many flops that can combine with holdings your opponents may have that will give them a better hand. For this reason many players like to try to bet as much as they can before the flop, when they know their hand is the best. A lot of players, especially in no limit hold’em tournaments, are willing to commit a lot of their chips with ace king. While ace king can be a very strong hand, you should keep in mind that if it does not improve, it is still only ace high, and can be beaten by even a lowly pair of deuces.

In Seven Card Stud, where you start with three cards, your best starting hand is three of a kind. Conventional wisdom is that if you have a small three of a kind, such as three fours, you should play fast, betting it right away, whereas if you have a big three of a kind, such as three aces, you can play it more slowly. The reason you can slow play aces in seven card stud is twofold. First, your three aces are already a strong hand, representing 60% of a completed poker hand, rather than only 40% in the case of pocket aces in hold’em. Second, since two of your aces are concealed and no cards are shared, you can improve your hand without your opponents realizing it, and even if you don’t, your opponents can improve to a hand that cannot beat you, such as two pair, and may be forced to commit a lot of chips while you have the best hand.

In Omaha Hi Low, the best hands are ace deuce double suited, ace deuce ace three double suited and ace deuce ace king double suited. These are the hands that give you the best chance to make both the nut high and the nut low. More than two of the same suit or rank in your hand is useless in Omaha, as you can only use two of your hole cards to make your hand.

So you know what the best starting hands are in poker. Now comes the hard part: convincing the dealer to deal them to you. Good luck!